Should the US Stop Supporting the War in Yemen? 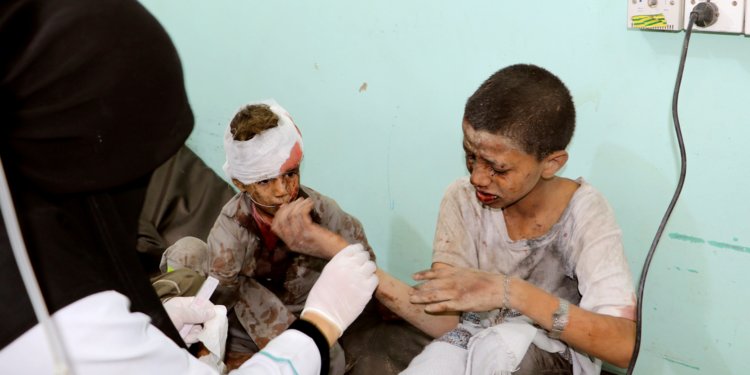 On February 22, 2015, a longstanding Shiite insurrectionist group known as the Houthis overthrew the Yemeni government[1]. Following a brief attempted restoration of government authority in February, the Houthis assumed near-total control of the country by March 25th as the Yemeni president, Abdrabbuh Mansour Hadi, went into hiding [2][3]. Hours later, the Kingdom of Saudi Arabia, fearing instability on its southern border, and perceiving the Houthis as a regional puppet of their archrival, Iran, began an aerial bombardment of the country at the head of a regional coalition [4].

As an intervention originally intended to last a matter of weeks nears its fourth anniversary, it is clearer than ever that the Saudi war in Yemen is an unmitigated disaster. Instead of a decisive victory proving Saudi Arabia’s military might, the war has evolved into a protracted stalemate, draining the Kingdom of men and resources in much the same way the Vietnam war did to the United States and the Yemeni war of the 1960s had previously done to Nasserist Egypt [5]. Indeed, the Egyptian example appears particularly instructive. Much as intervention in Yemen ultimately did much to destroy the United Arab Republic and dash the hopes and ambitions of its charismatic young founder, the current conflict has proven an albatross for Mohammad bin Salman, the young Saudi Crown Prince who pursued the war as yet another example of a resplendent new Saudi Arabia [6][7]. As the death toll has risen to approximately 60,000 casualties, and the complete economic collapse engendered by the conflict has put up to 14 million more people at risk of starvation, his legacy appears irreparably tarnished [8][9]. When reading such statistics, one must remember that each number represents an unimaginable amount of real human suffering. It is impossible to look at the pictures of children left emaciated by the war and not feel appalled [10].

Yet the responsibility for such horrific conditions lies not solely with the Saudi coalition, but also extends to the United States. Since the beginning of the war, the U.S. has provided the bulk of the weapons employed by Saudi forces, to the point that the Kingdom now stands as the single largest consumer of American weaponry in the world [11]. These arms sales have continued even as Saudi airstrikes have hit a host of civilian targets, from funerals and weddings to school-buses and a hospital operated by Doctors Without Borders [12][13][14][15]. Beyond the individual heinousness of these acts, and the aforementioned death toll and ongoing humanitarian catastrophe, the coalition’s indiscriminate bombing campaign has shattered the remaining economy of an already deeply impoverished country [16]. In providing the resources that have fueled such tactics, the United States has shared the culpability for its consequences.

Thankfully, the U.S. appears to be reconsidering its policy of unwavering support, as an increasing body of evidence that Crown Prince bin Salman ordered the murder of Jamal Khashoggi has bolstered previous dissatisfaction with the war [17]. The Democratic-controlled House of Representatives recently passed legislation that would halt all U.S. support for the Saudi campaign, mirroring a similar bill passed by the Republican-controlled Senate the previous Congress [18] [19]. These votes reflect an emergent bipartisan-consensus that the war must end, and limited polling on the issue indicates the broader public agrees [20].

Opposition to withdrawal lies in the U.S. not having accomplished either of the goals for which it began aiding the Saudis in the first place, namely combating Iranian influence in the country in the form of the Houthis, and reinstating the internationally-recognized Yemeni government overthrown at the start of the conflict [21]. Neither of these concerns justifies continual American responsibility for the death of innocent civilians, however. President Hadi, the ousted Yemeni leader, rose to the presidency in 2012 through an election in which he was the only candidate, having previously served for two decades as the vice-president of the country’s previous autocrat, Ali Abdullah Saleh, who was deposed as part of the Arab Spring [22][23]. To say that his authority rests on any measure of popular legitimacy is a frankly ridiculous assertion. As for Iran, U.S. support for the Saudi coalition has led to the exact opposite of its intended effect and mightily benefited the Islamic Republic. The Houthis, contrary to popular impression, have very little direct relationship to Iran, and even their Shiism, the principle commonality between the rebel movement and Tehran, is of the Zaydi variety, and substantially different from the Twelver branch practiced as Iran’s state religion [24]. The longer the war goes on, however, the more the Houthis have turned to Iran for aid and support, creating the very patronage network the war had been supposedly initiated to undo. Iran has benefited from the misconception to greatly damage their regional rival, providing a minimum level of support to the Houthis in order to force Saudi Arabia waste billions of dollars and greatly damage its relationship with its Western allies in a fruitless conflict with no end in sight [25]. Beyond merely damaging their rival, the war has benefited Iran in creating a reservoir of ill-will among Yemenis for their Gulf neighbor and its American backers, resentment which will last for years amid the aftereffects of the devastation, and which Iran stands poised to effectively exploit as it had done in Iraq [26].

The U.S. likely single-handedly possesses the means of ending the war [27]. A sudden withdrawal of American armaments support would leave the Saudi-coalition without a readily available alternative source for their speedily deployed bombs, effectively denying them the supplies needed to wage a war that already appears impossible to decisively win. To do so would better represent the values for which American foreign policy has traditionally stood, and be the first step in alleviating one of the world’s foremost geopolitical and humanitarian catastrophes.