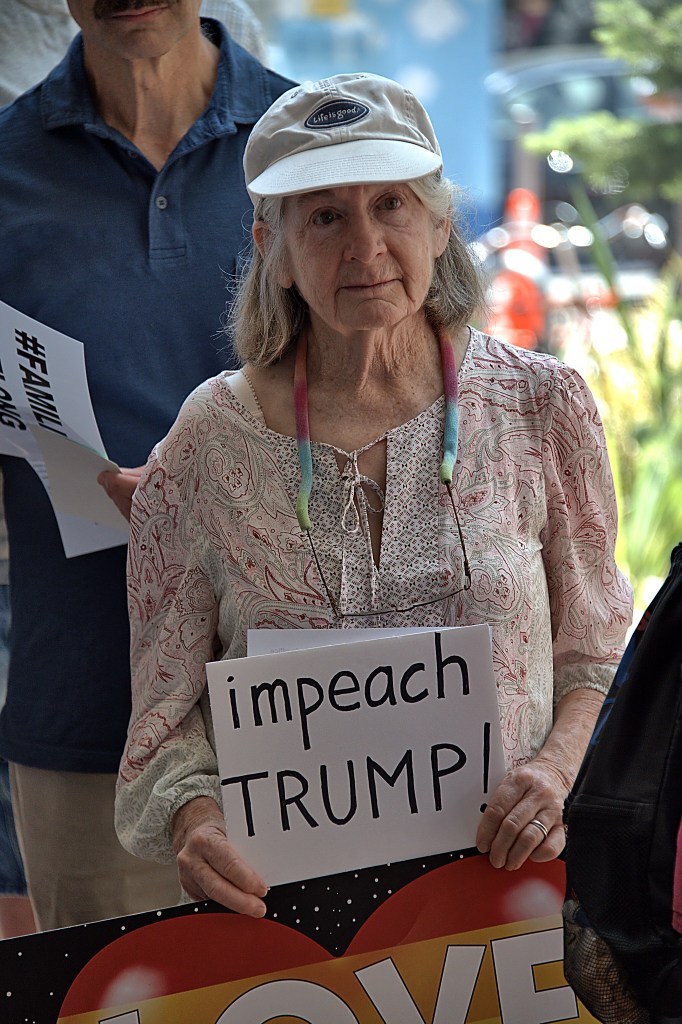 President Trump has faced controversy since the day his campaign began. From racism and misogyny to chaos and treason, the Trump administration has weathered every storm. However, with the incidents surrounding Ukraine, President Donald Trump may finally have crossed the line of political no-return. The response to the impeachment hearings has been decidedly partisan and may play a role in determining electoral races up and down the ballot in 2020. In this article, Aden Siebel and Rowan McGarry Williams discuss whether impeaching President Donald Trump would be a political mistake for the Democratic Party.
Aary SheoranEditor-in-Chief

The impeachment process, while necessary from a moral and legal standpoint, can be nothing but politically damaging for the Democratic party. Firstly, I fully agree that the process is absolutely a necessity for Democrats to pursue. President Trump has been able to eschew the norms, regulations, and duties of the Presidency for too long, opting instead for his own careless and immoral strategy of self-centered personal gain. For Congress to not hold the president accountable in the face of yet another brazenly selfish series of actions, one of many with significant evidence of illegal behavior, would be to ignore the duties of their office and would represent another step in the regression of our political system. However, from a purely political standpoint, impeachment is a disaster for Democrats regardless of the outcome. It will waste energy and time on a fruitless process that will serve to increase internal and external divisions just in time for a key presidential election, without shifting public opinion or political alliances in any significant way.

There is little to no evidence that this process, and the news surrounding it, has had any impact on President Trump’s public image. Although a majority of Americans support the impeachment process, the most recent data show that only 11% of Republicans support it, making it more a question of Democratic anger and public division than a metric of the American people [1]. The news doesn’t seem to be affecting his approval rating in any significant way, as it remains at a steady split remarkably similar to his approval rating [2]. And all of this is hardly surprising given the nature of this particular scandal. In terms of pure shock factor and morality, Trump’s Ukraine dealings hardly rate. Although this particular issue has been able to start a small wave of legal inquiries where others have failed to move beyond spoken condemnation, it is hardly Trump’s magnum opus of selfish idiocy. With the mass detainment and separation of families at the border, his nuclear waste of a twitter feed, and the ever-elusive tax returns (to name only a few of an enormous list), Trump’s week after week of unthinkable actions has lulled America into a persistent yet fruitless outrage [3]. This lockstate of party line indignation and loyalty hardly seems shifted since the beginning of the process. Trump is such a divisive figure that his public image has been cemented practically since day one, and with the impeachment taking up so much space in liberal news outlets and politicians’ agendas, it is disheartening not to see more of an effect.

With his flippant attitude towards norms and legality, alongside a history of remaining unpunished for his actions, Trump will almost certainly not be legally affected by the impeachment process. The odds that this process would actually lead to the removal of President Trump are extremely slim. The vast majority of Republican politicians still unwaveringly oppose the process, unsurprising given their staunch support of the President through scandal after scandal [4]. Even after increasingly damning evidence is released, Republicans remain firmly dismissive of the issue as a whole. Gordon Sondland’s recent testimony, which many had seen as the key evidence needed to more forward, left Senate Majority Leader Mitch McConnell stating that the Senate will absolutely not remove Trump [5]. It’s also important to remember that Trump has survived formal inquiries in the past. The convictions of his associates and the inquiry into the payoff of Stormy Daniels have been nothing but ineffective jabs that have only seemed to strengthen Trump’s selfish convictions [6]. Whenever Democrats seem to have found the smoking gun that will put Trump away once and for all, the President has managed to weasel his way out.

"Even if Trump somehow were to be removed, Democrats would be politically damaged."

Even if Trump somehow were to be removed, Democrats would be politically damaged. As the inquiry itself has generated no change in public opinion, I see no reason why removal would: Democrats would think of it as a victory, Republicans would claim it as dirty and underhanded politics. Most likely, his removal would incense Reupblican politicians and voters who already feel that the Democrats are attempting to circumvent legitimate systems [7]. In short, I can’t imagine that Trump’s removal would have any positive effect on the American political climate [8]. All of this comes before a critical presidential election, where a motivated and infuriated Republican base could easily challenge a Democrat who supported the impeachment process.

All of this adds up to a state of affairs that seems dire for Democratic political chances. While Democrats spend time and energy discussing impeachment in debates and Congressional meetings, public opinion remains unchanged, Republican politicians entrench their defenses, and valuable time and media space leading up to the 2020 election is wasted. This is truly a rigged loss for Democrats: forced into impeachment by norms and laws that the President blatantly and willingly ignores, without the support or systems to make them worthwhile, they face unfair but unavoidable consequences at all angles. Without a shift in opinion or real legal consequences, what can impeachment hope to achieve? By following the rules, Democrats play right into the hands of Trump, who has succeeded by a forceful denial of the system from his first day in office. If Democrats hope to convincingly shift the political tides of the country, impeachment is not the likely course. Without convincing democratic victories, Democrats only succeed in proving Trump and his “I could stand in the middle of Fifth Avenue and shoot somebody and I wouldn’t lose any voters” approach to the Presidency correct [9].

With the impeachment of Donald Trump well underway, Democrats have largely pivoted from wondering whether or not impeachment is merited to fretting over its political implications, fueled by a deep-seated fear of losing to Trump again in 2020. Given the scant historical precedent for impeachment and the general unpredictability of politics, it is impossible to predict the effects of the process with certainty. But clues exist, both past and present. What little precedent there is suggests that impeachment causes a decrease in support for the president [10]. Polling since the beginning of impeachment, moreover, indicates a sharp rise in support for the inquiry and a slight decrease in Trump’s approval rating. Finally, as the steady drip of scandalous news continues, Trump and his defenders are standing on increasingly shaky ground, which Democrats should be eager to exploit approaching election season. In all, Democrats should take comfort in the likelihood that impeachment is not only the right thing to do—it’s good politics as well.

The effects of both the impeachment of Bill Clinton and the hearings on Richard Nixon’s Watergate scandal demonstrate the political efficacy of investigation and accountability. Conventional wisdom holds that the partisan impeachment of Clinton ended up hurting Republicans in the 1998 midterms and the 2000 election, leading some Democrats to fear a similar backlash for Democrats in 2020 [11]. However, impeachment’s negative effects on the GOP in the Clinton era are often overstated, and there are key differences between then and now. Clinton remained a remarkably popular president in ‘98—far more popular than Trump is today—and the economy was strong. These conditions, rather than simply backlash to impeachment, created a difficult electoral environment for Republicans, who nonetheless held onto the House and maintained their same majority in the Senate [12].

As for Nixon, opinion surveys show that support for his removal—he resigned before impeachment could begin—didn’t reach 50% until more than a year after the first Senate Watergate hearings, when support was at only 19%. [13] If Democrats can take any lessons from Nixon’s resignation, it’s that a broad and consistent effort to dig up facts can unearth unexpected results and garner increasing public approval.

Polling on Trump’s impeachment further reinforces the salience of this lesson. Despite fears that impeachment would rally Trump’s base and force skeptical moderates to abandon the Democratic party, Trump’s approval has gone down since the beginning of the inquiry, while support for impeachment has gone up. Polling aggregator 538’s tracker of the president’s popularity shows that when the inquiry was announced on September 25th, 53% of voters disapproved of his presidency, while 43% approved. As of November 5th, 55% disapprove, with 41% approving—not a drastic change, but significant, and certainly not evidence of backlash [14]. Moreover, support for impeachment has surged from 41% to 48% in that same time period, including a 10% jump among independents; the percentage of those who don’t support impeachment has fallen from 50% to 45% [15]. In short, the endorsement of an impeachment inquiry by Democratic leadership has already moved public opinion in their favor.

"In short, the endorsement of an impeachment inquiry by Democratic leadership has already moved public opinion in their favor. "

Given the rapidly increasing depth and depravity of the scandals surrounding the Trump administration, there is little reason to think this shift in voter attitudes will reverse itself. Recent developments—such as Ambassador Gordon Sondland reversing course to describe the Ukraine scandal as a corrupt quid pro quo—point to the untenability of defenses of Trump’s actions [16]. Come 2020, the increasingly clear picture of Trump’s corruption will hamper the president’s reelection campaign, but also that of Republicans down ballot who continue to support their party’s leader. Indeed, Republican Senators across the country have already struggled to defend the president’s actions, and many have emphasized the lack of a clear quid pro quo only to see that rhetorical approach crumble in recent days [17].  To be sure, Trump’s actions in dealing with Ukraine might not be that much worse than a whole array of other scandals. However, this only provides Democrats with an opportunity to tie the Ukraine scandal to other examples of his corruption and make the impeachment process into a punishing drumbeat of daily, headline-grabbing denouncements of the president. As Democratic leadership continues to bring in witnesses for new testimony and conduct public hearings, it remains possible that they will uncover yet more evidence of Trump abusing the office of the presidency. For instance, the White House has been found to have restricted access to Trump’s calls with Saudi Arabian and Russian leaders in a manner similar to that of the Ukraine conversation. Democrats should pursue such leads going forward [18]. Of course, voter attitudes are enormously complicated and unpredictable, and the election could truly go in any direction; anyone suggesting otherwise is overstating the case. Many variables will affect results in 2020, most of which have little to nothing to do with impeachment. There are even a whole host of variables within the impeachment process—such as whether Democrats use their current momentum to investigate new avenues of potential misdeeds—that could change the electoral ramifications of impeachment. Yet what we already know about impeachment suggests that it will tilt the playing field towards Democrats and against Donald Trump, and potentially against Republicans in general. Democrats would thus be wise to avoid giving into paranoia and ceding the upper hand.
Rowan McGarry WilliamsStaff Writer