Qualifying for the Democratic Primary Debates Needs to be Tougher 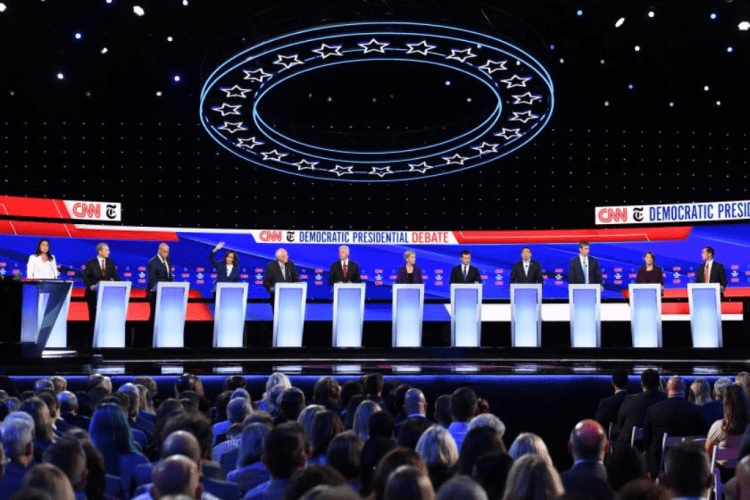 Even after losing eight candidates, the Democratic primary still features a staggering 19 individuals to choose from. Indeed, the Democratic National Committee has been criticized for allowing the number of candidates qualifying for the debate stage to balloon out of control. The bloated June debates in particular, in which the 20 qualifying candidates were split up over two nights, were received poorly. The DNC-sanctioned debates remain a crucial way for potential voters to assess candidates in order to determine who to support during their state’s primary. However, a crowded debate stage filled with non-viable candidates will only serve to divide the primary electorate and weaken the eventual Democratic nominee. The current debate thresholds are far too lenient, and must be raised in order to maintain an efficient and competent lineup of candidates.

The third democratic debate featured a significantly more stringent set of requirements, with candidates needing 2% in four DNC-approved polls and donations from 130,000 unique donors, 400 per state from 20 separate states, to reach the debate stage [1]. This resulted in a more manageable 10 candidates making the debate stage in September, as well as a flood of candidates ending their campaigns altogether. 10 candidates is still a large number for voters to consider, and the fact that a half dozen candidates dropped out instead of attempting to meet these more stringent requirements is a sign that they were not prepared for the rigors necessary for a presidential campaign. However the DNC decided not to alter its requirements for the October debate, resulting in the additions of billionaire presidential hopeful Tom Steyer and Hawaii Congresswoman Tulsi Gabbard to the lineup. While Congresswoman Gabbard had participated previously, her stagnant donor and polling performances would have made her ineligible for her fourth (October) debate. This decision by the DNC was baffling, as it resulted in the debate stage growing larger and more fragmented from September to October [2]. According to a poll from Politico/Morning Consult, 54% of voters believe that 10 candidates is already more than enough [3]. Voters are looking for clarity as the pool of potential nominees shrinks; growing the stage as the primaries grow closer is not helpful in giving voters choices between more qualified candidates.

The first question to consider is whether or not the current donor count qualifications are too lenient. Indeed, billionaire Tom Steyer has seen success by gaming the individual donor rules. According to ABC News, Steyer has “outpaced every single other candidate in his campaign ad blitz...in most of his online ads, Steyer is expressly asking donors to contribute $1 so that he can meet the donor count requirement… [4].” It is readily apparent then that his claim of 130,000 unique donors is not remotely an indicator of grassroots support, but rather a manipulation of the DNC debate qualifications. Other candidates such as Steve Bullock have seized on this as antithetical to the recent trend of getting money out of politics, complaining that the DNC has now “created a situation in which billionaires can buy their way onto the debate stage, and campaigns are forced to spend millions on digital ads chasing one dollar donations…[w]e’re kidding ourselves if we’re calling a $10 million purchase of 130,000 donors a demonstration of grassroots support [5].” The donor requirement is difficult to address. While one potential solution might be to increase the amount qualifying donors to be counted towards the requirement, this would tip the scales in favor of wealthier donors and candidates who cater to those individuals. It is therefore preferable to eliminate donor count requirements as a metric by which candidates can qualify for the debates, and focus solely on polling as an alternative to donor count.

"[A] crowded debate stage filled with non-viable candidates will only serve to divide the primary electorate and weaken the eventual Democratic nominee."

A counterargument to this is that the current debate qualifications lead to a larger pool of candidates, therefore providing voters with more choices. This is true to the extent that voters can distinguish between 20 or more different candidates in the first place. Such an overwhelming selection will inevitably lead voters to utilize superficial information and identity politics to group candidates. For example, white, moderate candidates such as Michael Bennet and John Delaney are commonly grouped into the “white middle-aged moderate man” group. The same can be said for black and hispanic candidates [8]. Furthermore, one can argue that low information among voters leads to an increased reliance on identity politics, contributing to the charged political climate observed before and after the election of Donald Trump [9]. It would be a mistake to simply bombard voters with dozens of potential candidates.

The DNC needs to be more aggressive in limiting the number of candidates onstage to prevent candidates like Tom Steyer from buying their way onto the debate stage. Deemphasizing the donor count coupled with a “first to 10” polling rule and raising the polling threshold would guarantee ten or fewer candidates on the debate stage, leading to an easier decision for voters and a more unified Democratic electorate in the general election.