Should Paternity Leave be Mandated? 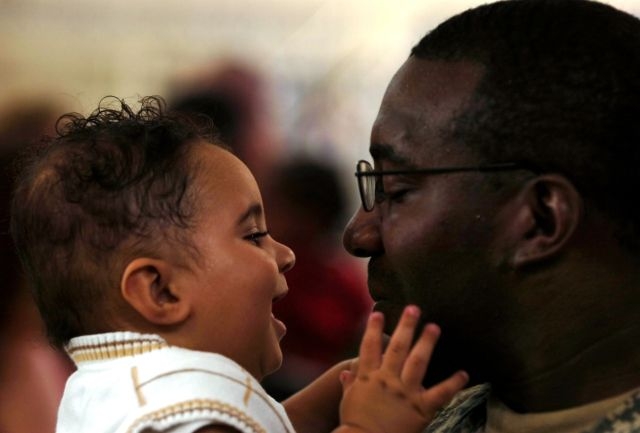 Out of the 196 countries in the world, the United States is one of four that doesn’t have a federally mandated parental leave. Usually we equate parental leave with just maternity leave, since mothers are traditionally often the primary caregivers, and many companies have in-house policies to support mothers. But parental leave also refers to fathers and many companies do not have a paternal leave policy. Since it is such an underrepresented area, federally mandated parental leave has become the topic of many debates. In this article, Claremont Radius writers Matthew Ludlam and Seth Taylor-Brill will argue over the necessity of mandated paternity leave, as well as the possible benefits and detriments of instituting this policy.
Ross ReggioSection Editor

To answer the first question, the National Bureau of Economic Research (NBER) studied California’s paid family leave program to see how it affected leave-taking. As expected, researchers found a significant increase in the likelihood of maternity leave-taking as a result of the program [1]. However, they found only a “minuscule” and a statistically insignificant increase in paternity leave-taking. The United Kingdom found similar results in response to its 2011 paternity leave program so researchers interviewed couples from the UK and around the world to find out why they had chosen not to take advantage of the program. They found that American men who request leave experience poor work stigma and femininity stigma [2]. Even men who would otherwise have preferred to take parental leave are dissuaded from doing so by US social stigmas. However, if paternity leave was mandatory, men would be sheltered from the effects of these social norms.

But why should we even value paternity leave? Increases in paternity leave are associated with higher fertility rates, improved health for fathers and children, and a smaller wage gap. Falling fertility rates in developed countries are becoming of increasingly large concern. Today, 46% of the world’s population lives in countries with fertility rates below 2.1 (the rate required to maintain a country’s population [3]). This means that the developed world’s population is beginning to age before eventually declining, making programs like Medicare and Social Security unsustainable. However, researchers at the University of Pennsylvania’s Population Studies Center have found reason for optimism. Once countries surpass the .86 threshold of the human development index, greater development is associated with higher fertility rates [4]. Researchers attribute this to public policies that promote gender equity, which has been shown to have a positive correlation with fertility rates. It seems somewhat doubtful that it is only a coincidence that countries like France and Sweden with some of the most progressive parental leave programs also happen to have the highest fertility rates in Europe.

"Increases in paternity leave are associated with higher fertility rates, improved health for fathers and children, and a smaller wage gap."

A 2013 study of French parental leave reforms found that longer maternal leave associated with the country’s more generous leave program reduced mothers’ wages by 10% for each year of leave taken and additionally reduced annual wage growth by 2.8 percent after returning to work [5]. Policies that mandate paternity leave will presumably reduce the length of maternity leave and help mitigate this decrease in mothers’ wages.

Finally, a Swedish study analyzing the health outcomes of men who took parental found that men who took between 31 and 60 days of parental leave had a decreased mortality risk of 25% compared to those who did not [6]. This lower mortality rate can be explained in two ways. (1) Paternity leave indicates a departure from traditionally masculine behavior such as alcohol consumption, worse food habits, and lower risk aversion. This would suggest that the relationship between paternity leave and improved health outcomes is merely correlative. (2) Research has found that fathers who take paternity leave have more stable relationships and more sex as a result, both of which are associated with improved health outcomes. This would imply a causal relationship between paternity leave and health. Ultimately, both explanations are likely correct to some extent. If so, this supports mandated paternity leave. Moreover, paternity leave has been shown to be positively correlated with improved mental health outcomes in children later in life [7]. Specifically, remote father-infant interactions are associated with a higher rate of aggressive behaviors in those children years afterward.

Despite, all of the evidence above supporting mandated paternity leave, many readers may nonetheless oppose it because of the significant restriction it would impose on people’s lives. However, it need not be designed in such a way. Countries that have mandated paternity leave do not simply require that fathers take a certain amount of time off work. Rather they require that some percentage of paid leave be paternity leave. In so doing, the government does not infringe on the rights of its people, but if they want to receive paid leave benefits, fathers must take time off. Although social norms differ from country to country, it seems likely that this policy provides a sufficiently strong motivation to compensate for social stigmas against paternity leave. Ultimately, the social and demographic benefits of paternity leave are so significant that it is in our best interest to provide a significant incentive for it, if not outright mandate it.

The paternity debate leave entails complex positions that became far better known throughout this past election cycle. Senator Bernie Sanders advocated for parental leave as a necessity of the modern world. He stated that the minimum wage ought to be $15 per hour and that parents ought to get paid paternity leave as a mandatory requirement. These activities were intended to spurn on societal development by ensuring people would not be negatively incentivized to have children, and that workers could thrive in an environment that paid them properly. The question we’ve been faced with today entails the less disputed half of his argument: paternal leave. It asks us whether mandated paternity leave is a good idea, and while I think there are solid arguments to be made in favor of it, I believe mandating it would cause more harm than good.

Let’s start out with a brief overview of paternity leave in the United States. In 1993, the United States passed the Family and Medical Leave Act which stated that some categories of men and women were to be given 12 weeks of unpaid leave upon the birth of a child or the placement of a child into foster care citation [8]. It was not gender-exclusive, but the FMLA only protected their jobs and did not guarantee them paid leave. Over the years the FMLA has been ratified, this includes redefining a spouse to include members of same-sex couples, but nothing has really changed its doctrine. It was intended to protect people from being fired if they recently had a child, but it never moved past that point. European countries, such as the United Kingdom, Sweden, and even Serbia, have had paternity leave policies for years, so why has the United States been so slow to enact a policy that’s intended to protect parents?

Mandated parental leave, and even regular paternity leave has a poor history of getting its countries’ goals fulfilled. European countries hoped that the fertility rate in their countries would rise. By giving mothers and fathers time off when their children were born, it would incentivize them to have more children. This initially sounds wonderful and logical, but children cost a lot more than a few weeks of paid vacation. The idea is short-sighted, as the few weeks a mother receives after the pregnancy could not compensate her for months of pregnancy, discomfort, and labor pains. This is not to say women should not have children, but this argument is akin to paying some $5 to run a marathon. While the $5 could be a contributing factor, the marathon is far more labor-intensive than the payout is worth. Parents understand that children are expensive, time-consuming, and a lot of trouble. Some parents want children, but raising a child to puberty can cost upwards of $100,000 in time and effort, and a little-paid vacation does not make up for this.

"Raising a child to puberty can cost upwards of $100,000 in time and effort, and a little paid vacation does not make up for this."

The other argument that is very similar is that people would be more likely to have children if they could spend the first few weeks with them, but that would not affect the United States as we already have the FMLA. Although the FMLA does not provide monetary support, it does protect your job for 12 weeks, which is more than than that of most European countries. Germany believed that their fertility rate would improve after the implementation of this policy, in 2007 the number of fathers that needed paternal leave was 5%, in 2014 that number rose to 34%, but the fertility rate stayed at it’s abysmal low, just above 1.4 children per women. The last major increase Germany saw was between 2016-2017, but this was a result of their immigration policy reforms rather than mandatory parental leave. It doesn’t make men or women more likely to have children.

The other major argument made in favor of paid paternity leave is that it supports families, but this simply is not the case. I am not saying that paternity leave should not be optional, I think it is in the company's best interest to incentivize new hires or encourage old ones with some time off to spend with their children, but to mandate it is an unnecessary burden on the company and it is not what most families need from the government. Congress proposed a plan that would provide a few weeks of paid leave but only for full-time workers. Studies from the Cato Institute shows mandatory paternity leave actually harms women from being able to re-enter the workforce, while optional paternity leave that targets part-time work as well as full-time has a much higher rate of integrating women into the workforce [9] [10]. Not all families want both partners to work full-time, whether it’s a man or a woman who’s pulling in the major hours, mandated paternity leave as it stand does not assist the families as  intended. It only encourages both partners to spend their entire day in the office than with their children, as only full-time workers would receive this benefit. Early childhood developers have been railing against the harms of abandoning children to nannies since the early 20th century, and research has shown it does horrible things to the children. Without their parents, these children often grow up timid and afraid due to exacerbated stress responses. They attempt to get the attention of people that won’t be there for them, and grow up having trouble forming real relationships. They are eager to please those around them as a desperate plea for love. Currently this is the situation in France. The men and women who would normally work part-time or out of the house find themselves trapped in full-time work, and have to hire nannies to provide supplemental care to children who need parents.

If the government truly wants to support families, then it should also assist companies to experiment. By reducing regulatory burdens on companies or mandating what they do, the government ought to give companies the ability to provide paternity leave on their terms. If paternity leave is important to the potential new hires, then the company that offers the better benefits to the individual will find themselves a new employee. This is a consequence of supply and demand, and it gives companies to adjust their models to the needs of their workers, rather than enforcing a model that fails to provide any national benefits for increasing the fertility rate, or domestic benefits for assist the family in their needs.

Featured Image Source: "Paternity Leave" by The U.S. Army— Own work. Licensed under CC BY 2.0 via Flickr Creative Commons — https://flic.kr/p/6toMnH