On Nuclear Strategy and North Korea 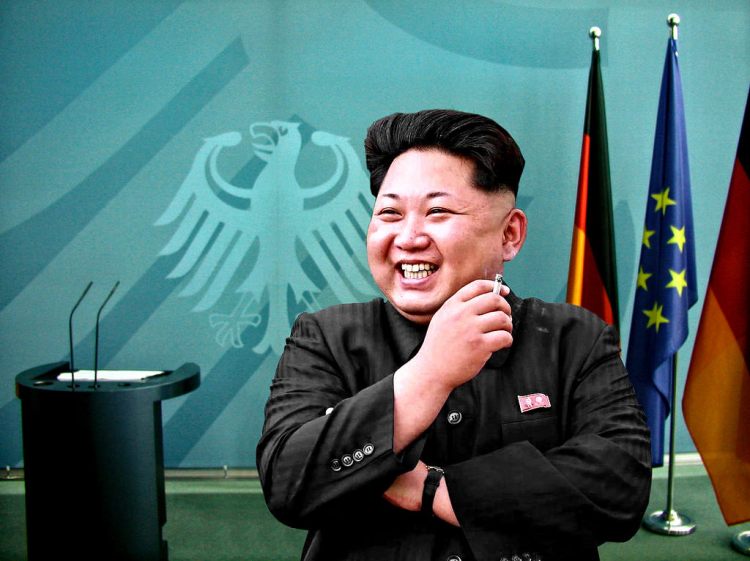 On April 15, a North Korean missile launch attempt failed [1]. But this should not relieve the United States. North Korea has marched its way to a sophisticated nuclear program, and will eventually develop the technology required to strike the United States if our policy towards the regime does not change.

When Donald Trump failed to understand the significance of the “nuclear triad” — our nuclear weapons delivery system that includes intercontinental ballistic missiles, strategic bombers, and submarine-launched ballistic missiles — in a primary debate, he betrayed a fundamental misunderstanding of nuclear strategy [2] [3]. In the decades following the second World War, the specter of “mutually-assured destruction” helped prevent the United States and the Soviet Union from destroying each other. Through a complex and lethal game, nuclear powers situate themselves such that no country would dare to launch a preemptive strike. However, contemporary nuclear strategy’s reliance on fear as a deterrent is not well-equipped to deal with impulsive world leaders. When those who control nuclear weapons are more concerned with appearing tough than preventing death, we have have reason to worry. This article will examine the shortcomings of the deterrent approach by examining U.S. nuclear strategy with respect to North Korea.

While different administrations may tweak nuclear policy to suit their own views, the overarching doctrine behind all of them is Mutually Assured Destruction. As such, American administrations seek to keep the threat of retaliation so fearsome that no country would dare attack us. Upkeep for thousands of B-52 bombers, submarines, and missiles is expensive, but necessary to maintain the ability to retaliate. However, all the B-52 bombers in the world will not deter an irrational or impulsive leader enemy.

An obvious place to find a dangerously impulsive world leader is North Korea. Kim Jong-un is well known for his nuclear provocations, such as the September 2016 order to conduct an underground test of a warhead that can be mounted to a ballistic rocket [4]. Mr. Kim likely ordered the assassination of his own half-brother, and has continued his inflammatory rhetoric towards the United States [5] [6]. This is not the sort of world leader who will reliably follow the predictions of traditional game theory. The threat of countervalue strikes (nuclear strikes directed at the civilian population) is unlikely to deter a man like Mr. Kim if he decides that a nuclear strike is required to maintain his grip on power. His people starve so that his government can pay for weapons systems which only sometimes work [7]. To put it as bluntly as possible, Mr. Kim may not be dissuaded from launching a nuclear attack by the threat of retaliation. According to The New York Times , Mr. Kim’s goal is to develop an intercontinental ballistic missile capable of striking the United States [8]. This should be extremely worrisome considering that Mr. Kim equated Sen. John McCain’s rude characterization of Mr. Kim as “crazy fat kid” to “little short of a declaration of war” [9]. While Mr. Kim’s rhetoric should be taken with a grain of salt (or two), provoking North Korea is not a winning strategy.

The United States does not have a lot of great options for dealing with a nuclear North Korea. Once a country has the bomb, it has little incentive to throw away such newfound power. Predictably, United States’s focus has been to prevent North Korea from developing nuclear weapons capable of striking the United States. Unfortunately, despite President Obama’s aggressive cyber campaign against North Korea’s nuclear development programs, the country has made steady progress towards the nuclear capabilities it so desires [10]. Recent reports indicate that the Trump administration is considering all options, including a preemptive military strike [11]. President Trump’s upcoming decisions will be all the more critical given the downfall of South Korea’s president and the possibility that a new administration there will take a softer line on North Korea [12]. Whatever Mr. Trump decides, he is surely dismayed by the ineffectiveness of past U.S. policy. Economic sanctions, political pressure, and cyberwarfare have all failed to halt North Korea’s progress towards the bomb. There is little reason to think that North Korea will be inclined to step to the negotiating table anytime soon, as Iran has. Even if negotiations were to take place, Mr. Kim has insisted that his country will maintain nuclear weapons [13]. A 2012 revision to North Korea’s constitution even refers to the country as a “nuclear state” [14]. All the more worrisome is North Korea’s history of cooperating with terrorist havens on weapons development. These countries include Pakistan, Egypt, Iran, Syria, Libya, and Yemen [15].

Some good news for the United States is that Mr. Kim has even begun to alienate his only international partner, China, by ordering the assassination of a China-friendly North Korean official (also Mr. Kim’s half-brother, whose assassination was mentioned earlier) [16]. This might make it easier for the United States to persuade China to take a firmer stance against North Korean provocations. However, Mr. Trump appears to be playing his hand poorly. His tweets have prodded Chinese President Xi Jinping to contain North Korea, prompting China to respond with an ominous warning about the state of the Korean peninsula [17]. Instead of publicly shaming our best hope to stop North Korea, Mr. Trump should look to work more closely with China on this issue. Unfortunately, this will require concessions. China might seek security for its illegitimate land grabs in the South China Sea in exchange for more robust assistance on North Korea, or several other capitulations from the United States. Navigating these issues will require a deft hand. But a certain degree of pragmatism is required to deal with nuclear weapons. North Korean denuclearization should be a top priority.

"...a certain degree of pragmatism is required to deal with nuclear weapons. North Korean denuclearization should be a top priority."

Some analysts have proposed that Mr. Trump’s recent airstrikes against Syria may have partially intended to deter North Korea from further provocations [18]. Mr. Trump’s ostensible willingness to use military force is an improvement from the Obama administration’s obvious unwillingness. President Obama’s strategy allowed the North Korean leader to continue his nuclear program without fear of a U.S. response. But Mr. Trump should exercise caution with respect to military action. The Clinton administration employed the military threat well, using the open threat of bombing a nuclear reactor to force Kim Il Sung to the negotiating table. This approach almost worked, but President Bush abandoned negotiations in favor of a confrontational strategy [19]. Mr. Trump would do well to emulate the Clinton approach, but his current policy of “maximum pressure and engagement” has not borne diplomatic fruit thus far [20]. Confrontation seems to have only bolstered Mr. Kim’s nuclear ambitions, given the fact that Mr. Kim has recently cited the airstrikes as justification for his nuclear program [21]. And Mr. Kim is not as pragmatic as his predecessor, fueling worries that negotiations are a dead end.

This seems to leave the United States with two options in dealing with North Korea. First, it could preemptively strike the peninsula. NBC has reported that this option is on the table, a notion that many journalists have disputed [22]. Such an action could imperil South Korea, and force the United States into another war in a faraway land. The second option is to continue pressing North Korea to denuclearize through diplomatic measures. But given Mr. Kim’s statements and past actions, it is nearly unfathomable that he would give up his nuclear weapons easily; it would require an extreme amount of pressure for Mr. Kim to even consider such a move. But China is unlikely to bring this sort of pressure, due to its vested interest in keeping Mr. Kim’s regime stable and U.S. troops away from China [23]. It is therefore unlikely that diplomacy of the sort we have already seen will lead to North Korean denuclearization.

This has prompted some analysts to propose militarizing South Korea and leaving the region. The rationale behind this proposal is that the Cold War is over, and that South Korea is more than capable of defending itself. Such a strategy would require a South Korean military buildup, and possibly a nuclear deterrent from the South, not just the United States [24]. Proliferation is a highly risky strategy, but might be worth it should it prevent a conventional war on the Korean peninsula. The prospect of redirecting U.S. dollars that currently maintain our presence on the peninsula without fear of another Korean War is attractive.

"There is some good news in all this. Mr. Kim is primarily concerned with keeping his regime intact, not mass murder for the sake of nothing."

So where does this leave the United States? Cyber sabotage can only delay North Korea’s progress. Diplomacy has failed it so far. Nobody wants war. None of the options seem very good, but that should be expected when dealing with irrational actors such as Mr. Kim, and possibly Mr. Trump. A North Korean intercontinental ballistic missile capable of striking the United States would be a difficult pill to swallow. But the alternatives are not good either. And if Mr. Kim’s regime come to the brink of collapse, it seems likely that Mr. Kim would respond furiously. The United States must be careful not to engage in hostilities that could lead Mr. Kim to bring about Nuclear Armageddon in a final attempt to cling to power.

There is some good news in all this. Mr. Kim is primarily concerned with keeping his regime intact, not mass murder for the sake of nothing. It is therefore unlikely that he will engage in action that would clearly lead to war with the United States. Such a war would eventually destroy his regime, a reality he surely understands [25]. As such, the United States should not attempt to undermine the regime too greatly, lest Mr. Kim resort to “I have nothing to lose” logic. But stopping North Korea from achieving the capability to strike U.S. soil is paramount. The negotiating table is likely the only way for the United States to achieve its main goals. But convincing Mr. Kim will require more than brash displays of power. North Korea might be receptive to offers that would enhance Mr. Kim’s grip on power. Economic incentives and a plan for his regime’s post-nuclear survival would be a start [26].