Do we Need to Rethink Free Trade? 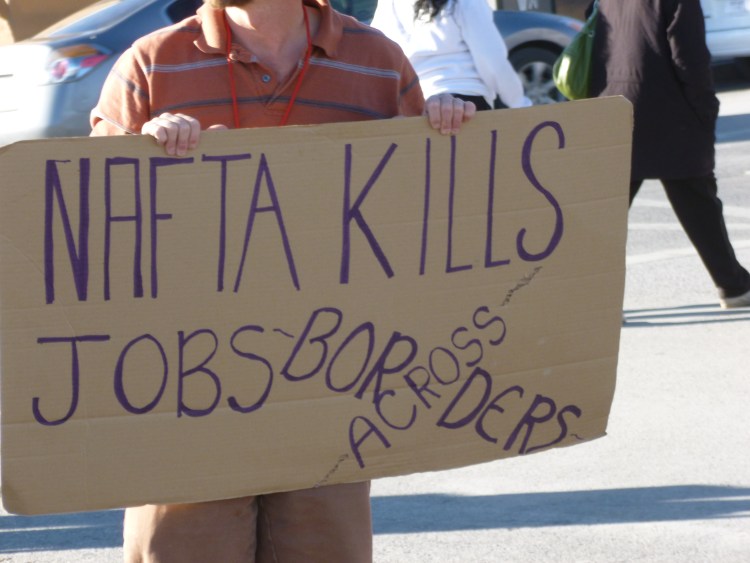 Among all pressing issues raised in the campaign for the 2016 election, free trade is among the most vital yet wonkish of issues. The neoliberal establishment, represented by a diverse array of candidates such as Hillary Clinton and Jeb Bush, stressed the importance of preserving and expanding free trade; meanwhile, the anti-establishment campaigns of populists such as Bernie Sanders and Donald Trump (despite polar rhetoric differences) rallied around the skepticisms of globalization and of the U.S’s  involvement in free trade agreements such as  the North American Free Trade Agreement (NAFTA) and the Trans-Pacific Partnership (TPP). Even though these candidates came from opposite ends of the political spectrum in a majority of issues, both Sanders and Trump recognized the flaws in supporting unabashed free trade.

Free trade entails the removal of economic barriers, such as tariffs and quotas, from movements of goods among two or more countries. The removal of tariffs and quotas effectively creates a global common market in which goods and services can cross borders and firms and compete with each other with ease, bringing prices to be lower and more uniform. Conservative economists, such as the late Milton Friedman, stress the need for free trade in order to stimulate economic growth. The argument is that free trade stimulates innovation because of the rise of competition with other firms across free trade zones and thus, leads to better choices for consumers who experience cheaper prices for consumer goods [1]. In addition, many conservative economists claim that free trade incentivizes risk-taking, which leads to increases in sales, profit margins, and market shares [2]. Despite the claims that free trade creates ideal conditions for economic prosperity, free trade takes a toll on labor and quality of life for millions of people whose industries and professions suffer from the establishment of a global common market. The creation of a common market open up competition and can crush industries and economic sectors that previously been the backbone of a country’s economy. These new market conditions might lead to populations that were depended on newly unviable industries to stagnate, especially if policymakers overlook the need to invest and reintegrate these populations into more viable economic sectors.

The effects of NAFTA on its member states is a clear example of free trade’s drawbacks. It is no question that 40 million jobs and $946.1 billion worth of trade have been created and traded between the US, Canada, and Mexico after twenty-plus years of NAFTA’s implantation; despite the growth in  trade and each member state’s GDP, however, NAFTA members’ domestic economies have taken hard hits [3]. For Mexico, NAFTA caused the destabilization of the Mexican agricultural sector, which led to massive migration of workers from Mexico to the U.S and a complete collapse in domestic investment into the Mexican economy [4]. Despite a significant increase in foreign investment and manufacturing sector revenue, that drop in domestic investment has slowed the growth of the Mexican economy to an average of 1.3% between 1993 and 2013 [5]. This is in contrast to other Latin American countries that have experienced an average of 2.2% growth in the same period of time [6].

The US too faced multiple drawbacks from the establishment of NAFTA. These drawbacks include trade deficits, job losses, and wage stagnation. Even though between 1993 and 2003, US exports to Mexico and Canada grew 95.2% and 41% respectively, while U.S. imports grew 195.3% from Mexico and 61.1% from Canada between 1993 and 2003, causing an over $85 billion trade deficit (in addition to the current $54 billion trade deficit with Mexico) [7] . This has led to job losses in all 50 states, 78% of the jobs lost were in the American manufacturing sector [8]. Such losses lead to downward pressure on the wages of unskilled and college-degreeless workers because of the influx of these individuals previously holding well-paid manufacturing jobs into lower paying service sectors jobs of which their wages get even lower with the influx of people going into these positions

"The US too faced multiple drawbacks from the establishment of NAFTA."

Granted the drawbacks of NAFTA, using free trade as a tool of sustainable economic growth is questionable. Historically, developed economies did not rely on neoliberal policies to spearhead development. Instead of the modern-day consensus of relying on low tariffs, subsidy reduction, deregulation of labor markets, and austerity to grow a nation’s economy, many developed countries during the Industrial Revolution, such as the US and the UK, pursued policies that included high tariffs, government investment in industry, and strict financial and monetary regulations [9]. Similar policies were implemented after the Second World War in the U.S. and Western Europe (consisting of the modern-day OECD bloc), which included investments in infrastructure and education, where growth was around 5% annually amongst OECD countries [10]. Yet, the 1970s brought neoliberal ideals—such as free trade— to the mainstream. Trade liberalization in Latin America led to stagnation in the 1980s, in addition to immense financial crises in East Asia, Russia, Argentina, and Turkey in the 1990s [11] [12].  Hence, instead of wantonly opening up for free trade, many nations in the past two decades, such as the BRIC block of middle-income countries [13], have strategically embraced policies that protect key industries (especially export industries) and implemented gradual modes of reform echoing policies the Asian Tigers took in the 1970s and 1980s [14]. This has resulted in increases in GDP per capita, life expectancy, and Human Development Index (HDI) scores in Brazil, Russia, India, and China [15].

When looking at the realities of free trade, nations cannot solely depend on it for economic development. Instead of merely pursuing free trade and other neoliberal policies, policymakers should instead foster gradual and sustainable development through the support of domestic industries, economic diversification, improvements in infrastructure, gradual opening of capital markets, and the protection of workers from abusive and absurd conditions. When these practice becomes commonplace, the drawbacks that might arise from a country's participation in a free trade regime will be mediated and thus, nations across the globe might fully benefit from free trade.