Should the UK organize a new Brexit referendum? 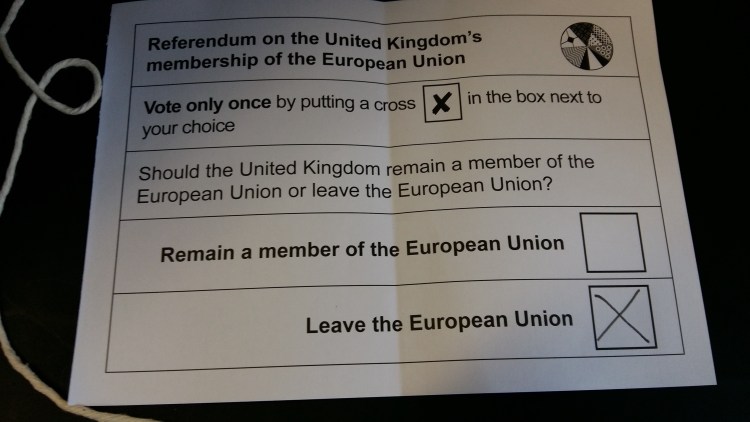 In June 2016 the United Kingdom voted to leave the European Union in a referendum called by then PM David Cameron. Since then, the UK has gone through a general election, has seen leadership changes in both parties, and has tried and failed to negotiate an agreement with the European Union about the relationship with the two entities. In short, the implementation of Brexit has been an unmitigated disaster, weakening all political parties and causing greater divisions in the British public. Here, Simon Gilbert and Grace Hickey debate whether the UK should call a new referendum to overturn Brexit and instead remain in the EU.
Aaryaman SheoranManaging Editor

In the two years since the Brexit vote confirmed that the United Kingdom would pull out of the European Union, Britain has been thrown into chaos. Polarization, the near-removal of the prime minister, and an absolute inability to agree upon a deal with the EU have all plagued the country as the March 29 deadline for Britain’s complete removal from the EU looms [1]. This pandemonium has precipitated a growing movement for a second Brexit referendum. Following the lead of the strongly pro-stay Scottish National Party, business leaders and politicians across the board have begun to call for a new referendum [2]. Pascal Lamy, former chief of the World Trade Organization, said in January that a new vote was “now an option,” which he “would not have said six months ago [3].” Now that it has been established that there can be a new Brexit vote, the question becomes, should there be one? For the sake of the UK and the EU’s stability and future, the answer is a definitive yes.

New polls show that the majority of people in Britain want a new vote, and most think it would result in a decision to stay [4]. This largely stems from the fact that what Brexit looks like now is not what the UK voted for. “The image of that voters were sold of Brexit is not what has come to fruition–in fact, the two are entirely distinct entities” argued New York Times writer Roger Cohen [5]. Pro-Brexiteers mounted a vision of a free and independent England-complete with a clean removal from and continued trade with the EU, as well as enhanced economic prosperity. Theresa May’s failure to get a Brexit deal passed through parliament, and the European Union’s refusal to renegotiate, mean that if a Brexit happens, it will likely be a “hard Brexit [6]”. There will be no leftover ties to the EU, no trade deal, and no border security.

"There will be no leftover ties to the EU, no trade deal, and no border security."

The Bank of England predicts that that outcome “would cause unemployment to almost double, inflation to rise to more than 6 percent, house prices to fall by 30 percent, and the pound to fall below parity with the euro [7].” This new reality is what voters should be able to make their decision on.

The key argument against the new vote, that it will undermine England’s democracy, is easily overcome. ”A democracy that cannot change its mind is not a democracy” said Cohen. Even if you set aside the fact that the reality of Brexit has changed vastly in the last two and a half years, a new vote would not upset England’s democratic principles. First of all, new evidence of significant Russian intervention in the original vote should at least bring its legitimacy into question. Russians created widely-viewed, fake social media accounts that spread untrue facts about the EU, and Russian businesses contributed large sums of illegitimate funding to the pro-Brexit campaign [8]. Secondly, the new vote would not result in more polarization: things could not get worse. The conflict between remainers and leavers has reached an all-time high, and the inevitable lack of a Brexit resolution will only exacerbate the tension [9]. If anything, the new vote would quell the rising divide by satisfying pro-stayers, and by incentivizing political compromise. As an example in favor of continued democracy, Both Denmark and Ireland reheld votes on whether or not to join the EU that reversed the outcomes of the original votes, and neither seemed to become less democratic [10].

If all of this wasn’t enough, the effect on nations other than England and Wales, who were the only parts of the UK that voted for Brexit, would be devastating. On January 2019, A car bomb went off in Northern Ireland. The attack was claimed by a group calling themselves “The New Irish Republican Army [11].” The actions of the group, which advocates for the British to leave Northern Ireland and allow the country to be reunited, are being blamed on Brexit-related tensions. Irish politicians are increasingly concerned that the introduction of a hard border through Ireland, as a result of the UK pulling out of the EU, could restart the violence from the civil war [12]. Similarly, Scotland is feeling increasingly isolated from the UK and fears the threat to their economy if the exit, which they did not agree to, is carried out [13]. As things stand, Scotland, Northern Ireland, and likely Ireland are doomed to be punished for a choice made for them by their historical oppressors. The idea of ignoring their struggle in favor of an old British population’s nostalgia for England's past role of the domineering tyrant is, quite frankly, morally repugnant. If the damaging effects of Brexit on these nations can be stopped, it should be stopped as soon as possible.

It has been two and a half years since the Brexit vote, and the picture has changed immensely since then. If Brexit is still truly want voters want, a new referendum will simply reaffirm the first one. If the voters change their minds, then the self-correcting nature of democracy has done its job. The only democratic option is to allow the voters to make their decision once they have all of the facts, and to not to stick them to the fabricated idea that they were originally sold.

The Glorious Revolution of 1688 is perhaps the most overlooked event in the history of liberal democracy. After nearly half a century of tensions between the English Parliament and the King, which erupted into a decade long civil war in 1642, William of Orange became the new monarch of England without any bloodshed. More importantly, and more remarkably, Parliament asserted its authority over the monarchy, setting the table for all future liberal movements [14].

328 years later, the United Kingdom went through another bloodless revolution, albeit an arguably less glorious one. When the United Kingdom voted to leave the European Union nearly two and a half years ago, after former Prime Minister David Cameron shortsightedly called the referendum to defend the EU, the entire political world was appalled. The “Remain” campaign squandered a double-digit lead in the final weeks of the race after it failed to adequately gauge public opinion [15].  This vote crashed world markets as the pound stooped to its lowest value in more than three decades [16]. Brexit foreshadowed the rise of populism that has plagued liberal democracies in the years since [17]. With only a month and a half left for PM Theresa May to remake a deal with the EU and get Parliament’s approval, disaster is lurking on the UK’s doorstep [18].

The question, one may ask, after all of this tumult, is: why would anyone support going through with this misguided attempt to leave? Why can’t the government hold another referendum posing the same binary choice between “Leave” and “Remain”? The answer to this question lies solely on the basis of democracy.

A few self-evident axioms define the success of a democracy.  These pillars should not require restatement in a virtuous political culture. Unfortunately, we lack that sign of a healthy society, so I will remind those who have forgotten these first principles of one in particular.  Accepting election results is absolutely necessary for the maintenance of legitimate representative government. Advocates for another referendum on the United Kingdom’s status in the European Union desperately need this reminder.

When UK voters voted to leave the EU, they did not vote “Leave, but maintain the UK’s trade relationship with the EU and keep the Northern Irish border open.”  Nor did they vote “Leave, but cut off all trade and immigration with the EU.” Voters chose--and by nearly a 4% margin - to simply “Leave [19].” The vagueness of this option may have been used to maximize support, but it does not affect the legitimacy of this popular decision.

Voters simply told the government that the UK is to leave the Union and leave the Union the UK must. If the government fails to implement the will of the voters, the UK’s entire system of democracy will begin to disintegrate. Imagine the government calls off Brexit because it failed to reach a deal with the EU or get it ratified in Parliament. This action would set a disastrous precedent. Referenda would then be legitimately reversible without the implementation of the voted-upon policy. If voters in the UK know their electoral goals may be discarded, why would they ever vote in a referendum again? More broadly, what good is a democracy if it fails to implement the will of the voters? Ironically, this crisis of accountability was a huge impetus behind the Brexit vote. The European Commission, whose unelected members are in charge of proposing all legislation on which the European Parliament votes, essentially determines all important policy in Europe [20]. While the Parliament itself is directly elected, its lack of power to determine its legislative agenda undermines its claim to coequal power. The people of the UK, who could not hold their government accountable on issues like trade, regulation, and immigration, voted to leave the EU to restore their right to representative government. The government must fulfill the wish of the people for the same reason that wish was made: to cement the legitimacy of government through proper representation. Democracy is not devised to institute the best policy results or forfend society from the worst ones. Democracy is in place to filter the will of the masses while implementing policy around their wishes. By definition, democracy is messy. Preemptively trying to clean up a mess created by voters will damage the foundation of the UK government’s legitimacy. The European Commission ravaged the principles of parliamentary supremacy; Brexit was an attempt to restore that democratic foundation. Leaving the constraints of the European system has felt like a Sisyphean task for Theresa May for the last two years. But that is precisely the point, (a fact that those searching in vain for a time machine conveniently forget). Leaving a convoluted and unelected body is inherently grueling work. Without specificity, voters told their government to pull the UK out of the European Union. This legally voted upon policy must be fulfilled to restore the principles of representative government. Otherwise, the UK will not only have ceded sovereignty to unelected bodies on the continent but also destroyed the democratic foundations set by their forebears in 1688.
Simon GilbertStaff Writer