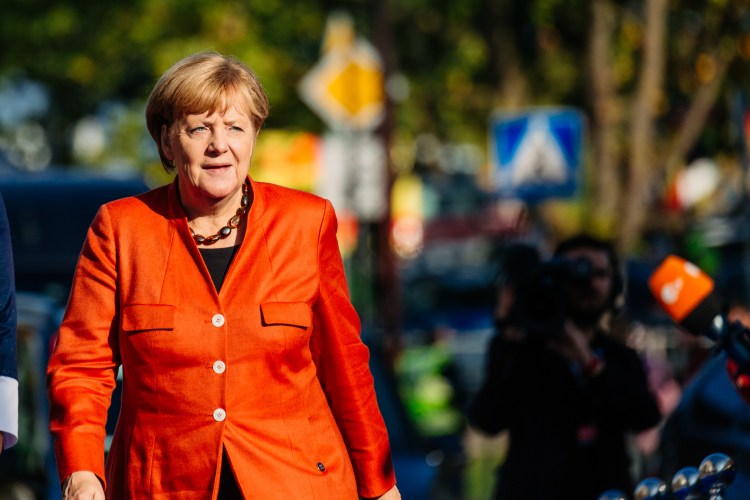 With the European Union elections scheduled for the end of May, immigration policy is a contentious issue. The continent is divided between restrictionists and those advocating for relaxed immigration policies, especially for refugees. In this article, writers Naomi Tilles and Axel Ahdritz evaluate Angela Merkel's signature immigration policy that preceded the current state of affairs
Simon GilbertManaging Editor

Germany adopted Merkel’s open door refugee policy in 2015, allowing asylum seekers to enter and remain in the country. As a result, over 1 million refugees arrived and settled in Germany over the past four years [1]. The policy marked a dramatic departure from the EU’s 1990 Dublin Protocol, which required refugees to seek asylum in the first European country in which they set foot [2]. The Dublin Protocol guarantees an unjust and inefficient system of processing asylum claims, leaving certain EU countries unequipped to handle the unprecedented number of migrants arriving at their borders while giving other states an excuse to appease their nativist supporters by deporting refugees who did not comply with the Protocol. During the massive inflow of Syrian and North African asylum seekers in 2015, the EU’s southern nations bore a disproportionate burden of the refugee crisis. Italy, Spain, Greece, and the Balkans lacked the resources to support the tens of thousands of refugees arriving on their shores. Merkel’s open-door policy was the most responsible action Germany could have taken to address the EU’s failure to adequately handle the refugee crisis, and it remains the best policy for Germany today.

The majority of the asylum-seekers affected by Merkel’s open-door policy are fleeing war, famine, and oppression in their home countries. Thousands have died making the perilous journey to Europe crossing the Mediterranean or at the hands of human traffickers. When these asylum seekers reach the EU, countries have an obligation to uphold their human rights to life and security. All EU member states are bound by the 1951 Geneva Convention Relating to the Status of Refugees and its 1967 protocol, which require that

“no contracting state shall expel or return a refugee in any manner whatsoever to the frontiers of territories where his life or freedom would be threatened on account of his race, religion, nationality, membership of a particular social group or political opinion.”

Additionally, EU law requires that host states provide asylum seekers with access to legal information, material reception conditions and health care, education, and vocational training while their asylum claim is being processed. By forcibly deporting refugees to Turkey while their claim is being considered, as is allowed under the 2016 deal, EU nations are failing in their legal and moral responsibilities [3].

In an ideal world, all EU nations would recognize their moral responsibility to aid refugees and accept as many as was feasible. However, the current trends point towards closing borders rather than opening them. France, one of the EU’s wealthiest countries, failed to meet its 2015 quota of 15,300 [4] refugees, while the UK has committed to accepting a paltry 20,000 refugees by 2020 [5]. Attempts to reform the EU’s immigration policy by mandating countries to accept their share of refugees have been unsuccessful. Most recently, a 2018 proposal from Bulgaria to revise the Dublin Agreement was blocked by both Italy’s nationalist government and Merkel’s own government after they failed to reach an acceptable compromise on arrival countries’ responsibility for refugees. Meanwhile, thousands of asylum seekers are stuck without a plan for permanent resettlement. Unlike border countries such as Italy and Greece, Germany has the resources to accept these refugees and should lead the EU by example through an open-door refugee policy.

"Germany has the resources to accept these refugees and should lead the EU by example through an open-door refugee policy."

Apart from the moral imperative, Germany benefits economically from accepting refugees. By 2030, Germany’s population is predicted to shrink by 6 million due to the aging population and shrinking birth rates [6]. Young Germans are seeking university education and high-skilled employment, leaving lower-skilled apprenticeships and trade jobs vacant. More than a third of companies are unable to fill all of their training spots [7]. Refugees have the motivation and often the skill set to fill these jobs, contributing to German economic growth. Today, Germany’s unemployment rate is at a record low of 3.7% [8]. Continuing Merkel’s open-door policy will allow an inflow of immigrants to counteract the decline in the German workforce.

Critics have blamed Merkel’s open-door policy for the rise of far-right populism in German politics. European nationalist far-right parties have gained support in recent elections while promoting anti-immigrant and Islamophobic policies. It is true that Alternative for Germany (AfD), a far-right populist party running on an anti-immigrant platform, has become the second most popular party with 18% of the electorate supporting it in recent polls. But this trend is occurring across Europe, regardless of the country’s immigration policy. Germany’s neighbor Austria, has a much stricter immigration policy and fewer services for refugees once they arrive [9]. Nevertheless, its conservative prime minister has allied himself with the populist Neo-Nazi Freedom Party and employed Islamophobic anti-refugee rhetoric to rally support [10]. Prime Minister Orban of Hungary--which has not accepted any refugees--has referred to asylum seekers as “Muslim invaders” [11]. The far right may be on the rise in Europe, but Merkel’s open-door policy is not to blame.

Merkel’s centrist Christian Democratic party has long promoted a platform of economic liberalism, social welfare, and European integration.  Appeasing Germany’s far-right parties by restricting the number of refugees accepted will not save Merkel’s Christian Democrats, it will only weaken its political message. While Merkel’s party remains the largest in Parliament and retains its legislative power, the open-door policy is Germany’s best option.

The story of Angela Merkel has become lore in the European Union. As the de facto leader of the supranational EU, she boldly pulled Europe through the Eurozone Crisis in 2010 and stabilized Germany in election after election with her technocratic, center-right coalition, the Christian Democratic Union (CDU). In 2015, when the Syrian refugee crisis hit, she let “compassion” guide policy in post-Nazi Germany, instituting a German “open-border” policy, while removing the EU law requiring Syrian refugees to claim asylum in their first country of arrival [12]. In the international news media, her story was dressed up as one of hope; to them, she was the last bastion of western values against the onslaught of populism. Unfortunately, Merkel isn’t as great as she seemed.

In 2018, broiled in public outcry, Angela Merkel stepped down as party leader in the ruins of the CDU. A reevaluation of her policies and leadership is well overdue. Throughout her term, Chancellor Angela Merkel was blind to the political contexts of Germany and the EU as a whole, creating space for populism and bigotry to grow. This story is a tragedy, and Angela Merkel is its poor, solitary hero.

Chancellor Merkel’s problems don’t stem from failed internal policies of refugee resettlement and integration, even if they leave much to be desired; they originate with the financial crisis of 2009 [13]. Unable to pay off or refinance their debts, several member countries economies fell apart following the property bubble that shook the US a year before, bringing the economic growth of the EU down with them. Acting quickly, Merkel took the reigns of the EU, imposing tough austerity measures on Italy, Greece, Hungary, Spain, Cyprus, and other failing member nations, effectively corking the crisis. However, Merkel’s powerhouse policies allowed Germany to rise up above the other member nations of the European Union, spawning a deep resentment of German economic might and creating the conditions for Merkel’s failure later on.

If 2010 aligned the nail to the coffin, 2015 was the hammer that drove the nail home. Merkel accepted more than 1.4 million refugees into Germany over the course of three years, with the expectation that Europe would follow suit. Seeking revenge for the German austerity measures and wanting independence from German might, EU member nations largely refused her advances and her pleas for them to “do their part” [14]. Yet, she continued. Charging forward with the same stubborn confidence that animated hatred for Germany during the financial crisis, she pushed for Europe to introduce mandatory refugee quotas through Brussels, asserting that “Europe has to stay together… it’s very, very important to me that Germany doesn’t act unilaterally” [14]. Once again, angrier than before, the EU member countries refused. But, once more, she failed to listen, refusing to cap the number of asylum seekers coming into the EU.

Merkel was acting from a hero’s ideal, letting pure ethical considerations and her self-confidence animate her policies. Yet, as more refugees entered, she plowed through the political realities of Europe, becoming the manifestation of everything wrong with the European Union, a figure that alt-right parties could tear down. Look at Italy and Hungary, where populist politicians like Salvini and Orban have created a platform founded in opposition to Merkel’s migrant policies and the EU as a whole. Look at Britain, where false news flowing from Germany’s streets gave Brexit the political imagery it needed to carry the vote a year later. Look at Sweden and Austria, where The Sweden Democrats and Austria’s Freedom Party, founded as anti-EU parties during the financial crisis, have destabilized their countries, growing directly with the continuation of Merkel’s refugee policies [15].

"She plowed through the political realities of Europe, becoming the manifestation of everything wrong with the European Union"

The growth of fascism elsewhere in Europe does not preclude the possibility of fascism at home. In the heart of this disaster, a new storm was brewing inside Germany among Bavarian conservative voters. Emerging as a Eurosceptic party in 2013, the Alternative for Germany (AfD) picked up support by rejecting the incoming refugees under nativist, islamophobic, and bigoted pretenses. The Christian Social Union, a sister party to the CDU, dominated Bavarian politics for decades, but Merkel’s refugee policies drew them too far left, creating an opportunity for the AfD to court traditional conservative voters [14]. Like bacteria in an open wound, the AfD leached on to German politics and spread throughout the country. With most EU member nations turning towards fascism, everything began to fall apart. Merkel retracted her support for refugees. The german border and resettlement programs shut down. Asylum pleas were revoked, and her policies were replaced with false, euphemistic promises of a “European solution” [12]. Merkel herself has gone from using the phrase “we can do it” to declaring that “the events of 2015 must not be repeated” [12]. Establishing “transit holding centers” across the borders of EU member countries, the borderless contient, the most visible expression of European unity, has been marred by walls, crime, and distrust [16]. Merkel failed the EU, failed the German people, and failed her refugees by creating the conditions that gave the enemies of the European ideal their opening. Of course, it is not completely Merkel’s fault that such xenophobia does exist, but as the leader of Germany and a prominent figure in the European Union, she had an obligation to find balance. After all, the European Union and integration which Merkel so vehemently supports was founded in response to the fascist regimes of World War II. The populists of Europe today, such as AfD, are reminiscent of a time before the EU where Swastikas flew over the European continent. A world built on polarities can never be sustained. As difficult as it would have been, Merkel needed to find a methodology of balance in the face of both a humanitarian crisis and a continent dividing at the seams. After declaring that she wouldn’t run another term, kicked out by her party and by an unstable EU, her fate finally caught up with her. The refugee crisis was the hill that Angela Merkel chose to die on. The real tragedy however, is that Germany and the European Union might fall with her.
Axel AhdritzJunior Editor