A Closer Look at the Usage of UAVs 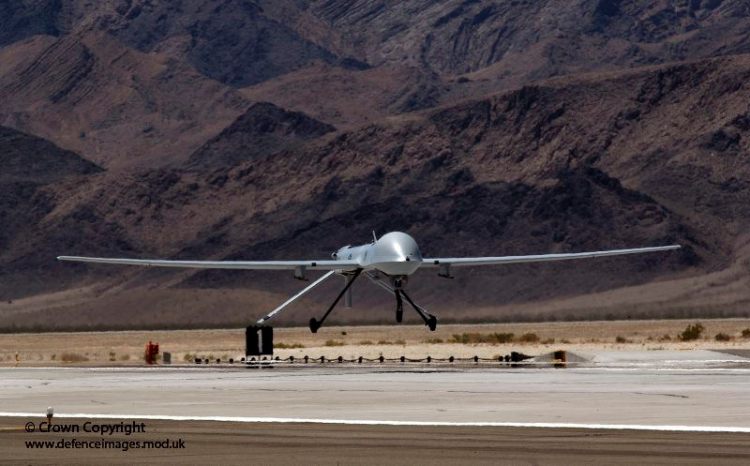 In both the U.S. and internationally, the usage of unmanned aerial vehicles (UAVs, or drones) is highly controversial, considering how the technological innovation could vastly improve the efficiency of climate research and military operation, yet keeping in mind the steep price of the high rate of unintended civilian casualties. Do the tragic downsides or philosophical pitfalls of drones outweigh the incredible potential benefits? How will various countries reconcile these arguments and formulate clear international law regarding the usage of UAVs? Jessica Kim and Jenifer Hanki provide you with several jumping-off points to help you navigate this complex issue.
Anonymous Editor

Despite the rapidly increasing availability of drones, international governments have made little progress enforcing meaningful regulation.

The United States previously held a monopoly on weaponized drones; however, this is no longer the case. Now, more than 70 countries possess some type of remote-controlled aircraft [1]. In one case in recent years, Japan staked control over small uninhabited islands that are claimed by China and Taiwan, and in late September 2012, China announced that it would begin using surveillance drones over these islands. In a separate case a month later, Iran revealed that the nation's armed forces developed a new long-range drone that could fly 2,000 miles — meaning that Tel Aviv is easily within their range.

The number of international drone developments has rapidly increased from 195 in 2005 to approximately 680 in 2011 [3]. Though the United States owned fewer than 50 drones in 2011, it owned 7,500 in 2012. Many European countries — Sweden, Switzerland, France, Italy, Greece, Spain, and France — are collaborating and making steps toward an advanced armed drone prototype — the Dassault nEUROn. Meanwhile, Pakistani authorities persistently attempt to persuade the United States to give them armed Predator drones. Insurgent groups have also been attempting to use drones. Before we know it, without additional limitation of drone usage, everyday citizens may be able to use drones for their own malicious purposes.

"Before we know it, without additional limitation of drone usage, everyday citizens may be able to use drones for their own malicious purposes."

Furthermore, though the machines themselves are precise, the our knowledge of who is getting killed is not. Over 400 drone strikes have occurred in the tribal areas of Pakistan since 2004, yet according to CNN, a study done by Stanford Law School and New York University’s School of Law concluded that only about 2% of the total casualties are “high-level” targets — This is an extremely low percentage, corroborating the fact that drones are not effective and should not be used [4]. In fact, the consequences of the drone strikes do not stop with just innocent lives being lost. Because of drone strikes, civilians in entire regions are constantly threatened by the possibility that they may suddenly die [5].

Improper drone usage may not only result in immediate death but also increased terrorism abroad. When innocent civilians are killed and family members lose their loved ones during drone strikes by the U.S., our nation breeds anti-American sentiment. Young men and women, distraught by the death of entire communities, are more susceptible to terrorist rhetoric targeting the United States. The radical ideas and propaganda resonate with the people leading them to join terrorist organizations. Though the initial goal of the drone strikes may have been to prevent terrorist acts, the drone strikes clearly do not help alleviate the situation abroad. At best, there may be no consequences. However, at worst, the drone strikes only further the problem and contribute to the rise of terrorism.

Often the mere utterance of the word “drone” takes us back to the ominously glorified Star Wars dimension and images of hellish rain falling upon humanity. But despite the intense fears that often arise from drones, drones can actually pave the road to the future.

Firstly, drones can replace satellites in weather prediction and offer a more cost-effective method of data collection for documenting climate change. In addition, drones can do things humans can’t. They have extraordinarily topographic satellite mapping and can assess the damages of radiation. UAVs are also beneficial to animal life: they can clean the plastic litter that hurts marine animals, end poaching of endangered species with ecological monitoring, and allow for reforestation aiding plant life in droughts. Furthermore, drones can serve as precise agricultural tools, harness wind energy in replacement of wind turbines, treat people in remote regions with the delivery of medicines, and even deliver pizza. Without a doubt, drones are an extraordinarily versatile tool that can help society in a number of areas.

"Without a doubt, drones are an extraordinarily versatile tool that can help society in a number of areas."

However, the main concern that is often the contested component of drones is the militaristic use and implementation in counterterrorism strategies. If we begin to use drones, we must consider the legal ramifications. Many fear that the use of drones can lead to unintended civilian casualties and often death in moments of drone strikes to eliminate terrorist threats. Similarly, the opposition believes that the current national and international guidelines explicitly prevent nations from infringing state sovereignty to legally use drones in another country. While these points have some validity, they are not enough to negate the benefits that drones reap through a drone-integrated military strategy and society.

In 1945, the United Nations Charter was created in which Articles 2(4) and 51 targeted the anticipatory defense aspect of this issue. Article 2(4) specifies that Member States should refrain from using force that would impair a country’s territorial integrity. The U.N. Charter makes the exception to the usage of force only if states consent with the Security Council and report directly as deemed necessary. Article 51 of this Charter does not explicitly restrict member states from taking action as the Charter does not preclude self-defense in any other instances, and that if an imminent attack is made clear, then the state have the right to self-defense. This very specific article acknowledges the existence for the “inherent” right to self-defense. This is due to the Caroline Doctrine of 1842, which essentially had accepted the concept of anticipatory self-defense. The Caroline Incident involved British troops had attacked and destroyed the Caroline (a U.S. naval vessel) which was proclaimed as “necessary and proportional” as the British government substantiated that the ship was directed towards attacking in the upcoming event. In addition, the use of high technology for the purposes of anticipatory defense was justified by the U.S. in 2002 through thorough examination of background.

The oppositional perspective can refute that the International Criminal Justice does not highly look upon the use of self-defense, but this can be simply repudiated by the case of Congo v. Uganda in the case that the Congo militants executing sporadic orders did not give Uganda the set rights to attack the armed militant groups individually. In this case, self-defense was not “necessary” and therefore declared as unconstitutional. By observing the events that had occurred influencing the change in international regulations, pre-emptive attacks should be utilized if Article 2(4) in the U.N. Charter is upheld with consent of the Security Council and that the precision technologies are installed to ensure the civility of counter-terrorism.

Thus, in order to ensure the utilization legality of drones, the following recommendations should be implemented. With the topic of drones, there arises a secondary question of civilian protection. Many drone strikes in the past led to miscalculated preemptive strikes in a result of obliterating the innocuous citizens. As a result of this highly controversial issue, we should necessitate installation of smart munitions technology to ensure the prevention of such civilian deaths and allow each country to take proper precautionary measures prior to a strike. Drones would be registered with the Missile Technology Control Regime and registration would be necessary to ensure culpability in a country if violating these standards.

While drones may incite controversy, drones offer an extreme multitude of benefits that many technologies do not offer. Arguably, unmanned aerial vehicles serve as the revolutionary innovation of the 21st century.